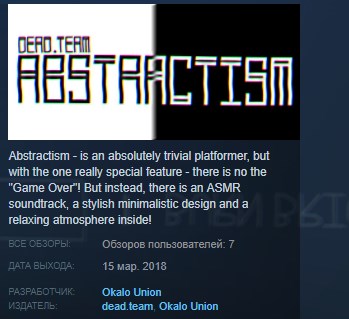 SteamMarket® information about the seller and his items
onlineAsk a question

Abstractism - is an absolutely trivial platformer, but with the one really special feature - there is no the "Game Over"!

But instead, there is an ASMR soundtrack, a stylish minimalistic design and a relaxing atmosphere inside!

Use the easily received achievements to fill your showcase with the phrases, gestures or your own nickname!

ASMR sound design
Abstractism contains a lot of soft and smooth sounds, which complements the relax atmosphere of the game.
All sounds (even user interface sound effects) made in one style. It is creates a unique extenuating mood. You can just run the game and listen!

Stylish artstyle
Despite that all game textures were made in Paint program, they were processed by the Cinnamon Core - kit of the graphics and effects libraries.
Simple, but difficult to implement artstyle supplements sound design and gameplay of the Abstractism.

Gameplay without "Game Over"
Use jumps, wall jumps and movement to achieve end of the level. Seems pointless, but:
The main and the only difference between the Abstractism and either platformer game is the "Game Over". You can´t die or lose in the Abstractism!
You can only waste time. But, remember:
Time You Enjoy Wasting is Not Wasted Time

This game is developed and produced by the Okalo Union team, and published with the http://dead.team/ team.

1. You need to download and install Steam http://steampowered.com/download/SteamInstall.msi
2. Go to your account or register a new one.
3. Go to the "My Games" and select "Activate via Steam ...", and enter the key received after payment.
4. Once activated, the game will appear in the game list (Library) and you can download it